View of Calascio and Rocca Calascio from the cemetery

After treating my dehydrated body to a coke, I walked to the castle. I was alone at the castle for a while. First it felt scary to walk alone along the massive walls. As I relaxed it became magical. Then other tourists arrived to break the spell. Most were Italian, but some were English, Scottish or  German. Later I tried to beg a ride down to the town of Calascio from Paolo, the hotel owner. He gave me the phone numbers of the three Americans in Calascio. Paolo said I should buy a house here and learn Italian with the other Americani. He had his children direct me to the path. The path is much quicker than the road. It crosses the road 3 or 4 times.

I walked through the town and found churches, buildings that were empty, buildings with large cracks, a building with workers, and many buildings with flowers in front and lace in the windows. One of the first streets I found was Via di Mezzo la Terra or middle Earth Street. I felt suddenly transported to a Tolkien novel.

At 4 pm I found a computer in Vittoria’s Bar on the lowest or main street where I had a gelato. The girl behind the counter said I could use the computer “quando vuole”. Vuole, “you want,” is a word I studied very much, but it took me a minute to register that she was actually offering me free access to a computer. 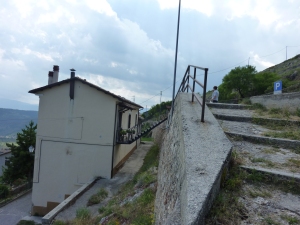 The step-bridge that Vittoria crosses to get from her house to the road.

After writing home, I headed back up the hill to return to my room. On the top street, I began to look for the start of the path. I knew I was close. I watched a woman walk over a stepped metal bridge that connected the door to her house to the road and then I asked her where the path was using my best Italian. She didn’t understand me, so she shouted down the hill to a man. When she said I was Americani, he quickly found several other people. Suddenly there were people asking me where I was from in English. “Wisconsin”. “Where in Wisconsin?” “Eau Claire.” “NO! We’re from Ettrick!” Thus I met Marissa and Fred who have a house in Calascio and a farm about one hour from my house in Eau Claire. In no time I was sitting at their dining room table discussing our ancestors and Windber, Pennsylvania. I heard their story: how Fred came to Calascio to find his roots and met Marissa. They have been married for 42 years. Marissa said, “We are all Calascini, we are all cousins.”

It felt like I was back in Windber in a relative’s kitchen. Everyone knows about Windber. When Calascini emmigrated in the late 1800’s, either they went to Windber, Pennsylvania or to Riverton or Toluca, Illinois. Everyone was racking their brains for my family connections.

Italian Word of the Day